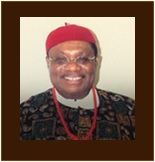 Member of The Board

Dr. Ignatius Ukpabi, “The Lord Mayor” of the Washington DC Metropolis, as he is fondly known by his countrymen, professional colleagues, and other Africans and African Americans within the Greater Washington DC metropolis, is a flamboyant and eloquent gentleman who came to the United States after a successful and distinguished formal educational career in Nigeria.  He hales from Atani in Arochukwu, Arochukwu Local Government, Abia State, Nigeria.

Dr. Ukpabi attended Howard University, Washington D.C. where he obtained Bachelor’s and Master’s degrees in the pre-medical sciences.  He further read and obtained Ph.D. in Epidemiology and Environmental Health at the George Washington University also in the District of Columbia.  He is certified by the National Cancer Institute (NCI) as Cancer Information Specialist.  Dr. Ukpabi served as a Quality Control Specialist/Epidemiologist with the District of Columbia Department of Health (DOH). He has taught graduate studies in the field of Public Health and Health Management as Adjunct Professor in several institutions of higher learning in the Washington DC metro area.  He also served as Director of Research & Development and Case Management Specialist in several medical centers.

He is an author of several publications and special research reports in the areas of health systems, epidemiology, and toxicology.  Dr. Ukpabi has received numerous awards and commendation from several institutions and community organizations as a reflection of his multiple achievement and services to people of African descent within the greater Washington DC area.  He serves as a Patron to various organizations including Abia State Development Union-DMV (District of Columbia, Maryland, Virginia), All Aro USA, Nzuko Aro-DMV, Council of Igbo States in America (CISA), and Atani Welfare Union, USA.

Dr. Ukpabi is blessed with the gift of the gab and this gift has portrayed him as one of the best and most sought after Master of Ceremonies (MC) in the Washington DC metro area – they call him the Dean of MCs.  He has served as MC in several weddings ceremonies, Embassy functions, Ambassadorial sendoff activities, African and African American cultural functions to mention a few.  His constant usage of Latin phrases like “ad multos annos” to express his innermost feelings at these functions is greatly appreciated by the audience.

Dr. Ukpabi is a dedicated Christian and blessed with three children and three grandchildren.  He enjoys sports, dancing, highlife, and classical music.